I was always told that the Terrible Twos were so bad. That during that stage they would throw tantrums, be hellions, assert their independence, etc.


No one mentioned the threes.


The threes are making me nuts.


The threes are making me insane.


The threes are making my question why I wanted kids.


The threes are going to drive this momma to drinking.


Is this like some secret society pledge? Don’t tell the new mom’s about the threes. Do the threes even have a cute little nickname like the Terrible Twos?


It happened over night. The night of their third birthday, the threes-attitude showed up. They are these little independent, mouthy, smart, conniving, not-toddler anymore three year olds. They know everything. They want what they want… RIGHT NOW. They don’t like what we have for dinner. They don’t like each other. They choose what they want to wear. They control the world!


The newest attitude we get from them is if they don’t like something we do, they say they are going to put us in time out or put us down for a nap. (Which, at that point I think to myself, “I wish someone WOULD send me for a nap!) They throw fits over the stupidest stuff—which, in the world is obviously big. The apples weren’t peeled. The chicken nugget—Heaven forbid—was touching the applesauce. The other day, my son burst into full-fledged tantrum because I wouldn’t let him pick which Max and Ruby to watch. Seriously.


The twos don’t seem that bad these days. We are 10 months away from their fourth birthday. I hope I make it.


Now, don’t take me the wrong way. I love them at this age. I love being to take them places to explore and they “get it”. I love seeing them learn and discover new things. I love seeing the glimpses of the kids they are becoming. I love hearing the I Love You, Mommy’s and the hugs and kisses. I love walking in the door and them dropping everything and rushing to give me a hug.


I hope this isn’t a sign of things to come in their teenage years. 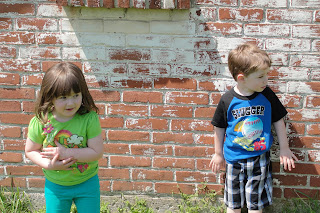