Skip to content
My son is a gamer.
At three.
Daddy and Bo play video games together.  Racing, Mario, Dora.
He even races online—and usually places in the top 5—on Mario Kart.
It amazes me how far video games have come since I was three.  We had an Atari.  Remember the big, chunky cassettes you had to use?  Then, we moved up to an actual- gasp- computer!  A Tandy.  Remember those?  You had to use Basic programming to even play a game… by the time you typed all the lines in, you were too tired to play.
Not now.  Troy knows how to put the game in, turn the Wii on, flip the TV over to the correct input… he even just recently accomplished using the “hand” on the Wii remote to select things.
Now, before the comments start rolling in—we play these games WITH him.  We don’t use it as a baby sitter and he is not allowed to play anything violent or with guns.  His choices are severely limited to Dora and the Enchanted Castle, Mario Kart, Mario Party, and Super Mario Brothers.  He doesn’t even know other games exist.  His play time is limited.
I just find it hilarious that a three year old can operate a video game, let alone play and win races.
Guess I shouldn’t be surprised.  He is very technically-minded.
Troy taught me how to “pinch and pull” on my iPhone at two-and-a-half.
Go figure. 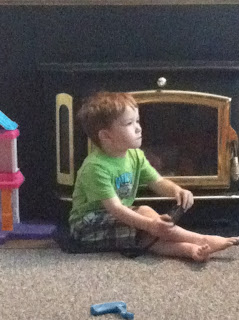