My kids are so old-school.  I just realized this recently.
They watch Scooby Doo, Flintstones, Tom and Jerry.  They have even sat and watched I Love Lucy reruns with me.  Seriously.

I have three year olds who watch the stuff I watched growing up… and ask to watch it.

It doesn’t stop there.  We have a few games from when we were younger–one of them being this basketball game that has these ping-pong balls and metal levers to flip the balls into the basket.  The date on it is 1976.  Yes, I said 1976.  The kids love playing this basketball game… and can make the baskets on their own.  Check out the game in the pics below.  Go figure. 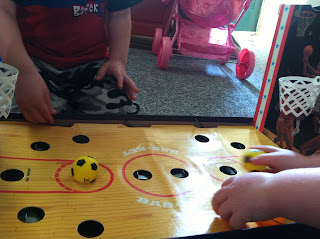 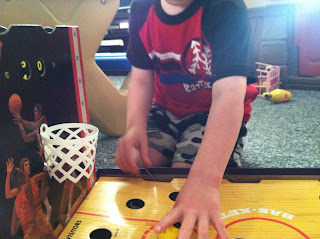 Where did this old school mentality come from?  From me.  I love nostalgic stuff.  I would rather watch an I Love Lucy or M.A.S.H. rerun than anything else on television.  When the kids were babies and we were getting up for the nightly feedings, we would DVR reruns of Three’s Company to watch while they we were eating.  Maybe that’s where it all stems from.  Or, perhaps from all the Lucy reruns I watched while on bedrest.

They have recently gotten into Scooby Doo and Tom and Jerry.  Miss Morgan even can sing the entire theme song to Scooby Doo– without music or help– and will occasionally call out “Scooby, where are you?” while playing.  They cheer when Jerry gets the best of Tom.

You have to admit– back then was a simpler and better time.  We were able to play outside until dark, drink from the hose, and even help mom or dad drive the car while sitting on their laps.  All the moms on the street were suitable replacements for your mom when needed.  Where did that go?  I miss Mayberry.

So, for now my kids are old-school.  If i have any say in it, I won’t let that change.  Mayberry residents with street sense.

I can’t wait to introduce them to WKRP and M.A.S.H.